There is much to be said about the small, relatively unknown local museums that tell us, in great detail, about the town or city where we live. History comes alive as it is so familiar to us. We have walked these streets and know these buildings, we probably drive past them everyday. Yet we can know so little about where we live. The big museums can cover fascinating world or national history but the council run, smaller museums can teach us so much about local history which can be more poignant.

If you visit Market Harborough in Leicestershire, be sure to make time for the museum. Opened in 1983 and tucked away behind the library, it is a little gem. Two of the most impressive exhibits include the Hallaton Treasure, the largest known hoard of Iron Age coins in the world and a Roman cavalry parade helmet.

The Hallaton Treasure was discovered in 2000 near Hallaton in Leicestershire. The initial find was made when around 130 coins were found with a metal detector. The find eventually became a hoard of over 5000 silver and gold coins, a parade helmet and other items. They date back to the Roman conquest of Britain. One of the coins has been dated to 211 BC and is the oldest Roman coin found in Britain. 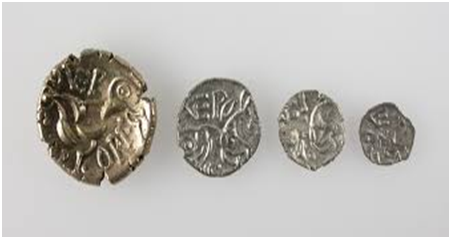 The museum sits in a building that was once a corset factory and celebrates the town’s history as a market town and the centre of trade between Leicestershire and Northamptonshire. To see such a fantastic collection of Roman coins, it is well worth a visit. For more information visit http://www.marketharborough.com/ .

Market Harborough also offers plenty of opportunity to shop with a variety of big names and independent retailers. The Market Hall offers groceries and hot food and there are many restaurants to choose from and also an indoor market to explore. Other attractions nearby include gliding, vineyards, heritage trails and Wistow Maze, a giant 8 acre maize maze with 3 miles of pathways and bridges and towers. Opposite the maze isa café, garden centre, model village and art gallery. There is so much to see and do in Leicestershire.