Say ‘I love you’ with a padlock

February is the month of love and romance with Valentine’s Day and what better time to take a look at a lovely expression of love and hope. The love lock or love padlock is something that lovers lock to a bridge, fence or gate as a public showing symbolizing their love for one another. It is customary for the initials of the sweethearts to be engraved onto the lock and the key is then discarded as a symbol of an eternity together.

This tradition has greatly increased over the last fifteen years and can be seen in many different locations across the world. Some countries love them and treat them as a tourist attraction or fundraising project but other authorities think they are a nuisance and try to have them removed. For a Belfast Locksmith, visit http://www.belfastlocksmiths247.co.uk/.

There is a beautiful but sad tale behind the origin of the love lock. A school teacher from Serbia called Nada fell in love with a Serbian officer named Relja. They got together but when Relja was sent to Greece to fight in WWI, he fell in love with a woman from Corfu. Nada never recovered from her heartbreak and eventually died from a broken heart. Other young women from the Serbian town wanted to protect their loves so they started to write down their names on padlocks and fixed them to the bridge where Nada and Relja used to meet. 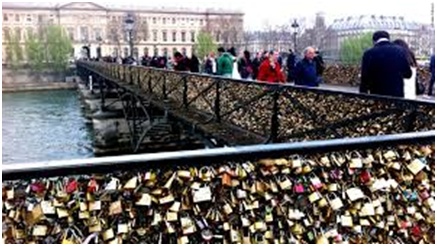 Love locks can be seen in many countries, including South Korea, Poland, Algeria, Canada, Australia, America, Germany, Italy and the United Kingdom. One of the most famous love lock bridges is in Paris on the Pont des Arts. Love locks have since spread to many other bridges along the Seine. Many visitors believe it to be an old Parisian tradition but it only began fairly recently in 2008. Unfortunately, the sheer number of locks led to part of the bridge collapsing under the weight and so the locks have had to be removed. A website has since to be created so people can send virtual love locks instead.

Be careful if you’re feeling romantic whilst abroad however as in Berlin, applying a lock to a bridge is a misdemeanor and can result in a fine. Venice, Italy is among the cities where it actually forbidden and adding a lock can incur a 3,000 euro fine. The main concern, aside from affecting the aesthetics of city architecture, is rust and structural damage caused by the padlocks.

Scotland offered a clever idea by devoting a specific spot for love locks. Four sets of panels were installed on the Forth Road Bridge in Edinburgh for locals and tourists to buy and affix locks. The money raised from selling locks helped the local lifeboat service.

In some countries, the locks have almost achieved legendary status and have a lot of superstition attached to them. In Taiwan, for example, love locks are often fixed in pairs onto the city’s train station overpass. They are called Wish Locks and locals believe that the magnetic field created by trains passing cause energy to accumulate in the locks and fulfills the wishes contained in them.

« Are you trying to lose weight? This may be the best time
Should teachers wear body cameras? »