It is one of the most fearful moments. The invitee through the post, the Facebook request to like and will you attend. The round robin email they all bring the same thing and the same daft idea. It usually reads like this

“Hiya, well its getting on for 30 years since we left (insert college, school, university here) and I thought wouldn’t it be a great idea if we all got back to together again at our old haunts or even the school itself! It’ll be great catching up with everyone and seeing how everyone is getting on. Love Marnie Brathwaite (nee Spode)” 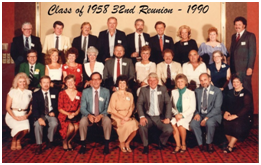 No, it wouldn’t Marnie and let me tell you why. There is usually a reason why people have lost contact or not wanted to keep in touch. You can guarantee that old Marnie there has made a tremendous success of her life, had the career and had the kids and married well. She probably has enough money to set up that personalised wedding stationary business that she always wanted. Either way she’s looking t boast. Now my ambition is to produce work like the social media agency Cardiff company https://intranetfuture.com/ but at the moment I am still just playing around on my applemac at home.

Why would I want to go to this kind of thing? Its just a chance to show off, “So Brian how did your life work out then after you left Grindewald Comprehensive?” “Well Jeff, I went into marketing and I now run an agency that operate out of Hong Kong and Tashkent specialising in agricultural projects, what about you?”, “Oh I run a little firm our Car showrooms, simple things like Aston Martins you know nothing special”.  This will go on all night until Jeff and Brian get so drunk they start to cry and pledge eternal friendship and then won’t see each other till the next one of these debacles and have the same conversation. They forget that Jeff used to be hopeless with girls and Brian spent most weekends being sick in the gutter because he’d hit the lager to hard. Guess what the same thing will happen tonight as everyone forgets they’re 46 and think their 16 again. It’s like a weird psychosomatic response, they should do studies.

I’ll tell you why Marnie’s done this thing. She is still secretly in love with Martin Gorman. The coolest boy in school who Marine dated for a bit but got dumped because she couldn’t live with being Marnie and Martin, plus he didn’t do what she wanted. Now Marnie’s read some chick lit and she’s bored with her life and thinks an affair would be a good idea. Her friend Veronica (not from School of course) suggested it after she had one.

I’m just asking this al up of course, It’ll be fine, everyone will be as nice as I remember them, and we’ll have a laugh and reminisce about it all. Also, I wouldn’t mind a go on Martin myself after I saw him uptown the other week.

« The reality about proteins in your training: The 13 aspects you should know
Why the Importance of Grease Traps Should not be Underestimated »