Have you ever cooked before? Do you leave it to your other half to shoulder the burden of getting the dinner or the tea on? In the 90’s this was crime that could only be cured by going on a BBC midmorning television program and be barked at, without malice, by either Kevin Woodford, Lesley Waters, Richard Cawley, Tony Tobin and, if you were really lucky, the always entertaining Ainsley Harriott. 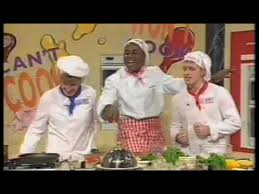 Given access to a kitchen with all the mod cons the Non cookers were shown a technical but in reality easy to make tasty dish by the celebs. They would show the culinary dunces who to make it and what was involved. All the ingredients were laid out in front of the novices so that they could follow under instruction how to cook the meal. Some took to it like a duck to water whilst others stared blankly into space wondering what hell they had stumbled in on as an imposing  person in a chef’s hat ( with the factor of added height and personality in Harriot’s case)  screamed at them as their chicken burned. 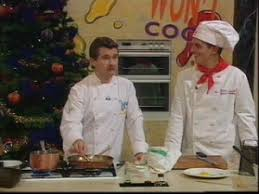 One of the main problems that the non-cooks had was with the blender or food processor. Most of the recipes involved using them as this meant that the whole dangerous business of using knives was taken out of the equation and the last thing the BBC needed was a gory incident. The issue was that the contestants failed to take the inner lid of the blender so that when they added the ingredients they were suddenly faced with all of it sat in the top of the mix going nowhere. The look of puzzlement from them would produce acted exasperation from Chef Woodford who would look at them with the contempt they deserved. This was made worse by the fact that when they did put the ingredients in they forgot to put the stopper back again and wondered why the thing didn’t work when they pressed the button.  The automatic cut off saving the studio audience from a drenching of soon to be sauce.

Egging them on from the side-lines was the person they had come with who could cook. They had a vested interest in them getting it right as they were to take a blindfolded test of the burnt offering to try and figure out whosoever’s was best. If they couldn’t find a winner the Celebrity chef had to choose. To the victor went the spoils. In some cases it was a make of the food processor that had caused all the issues in the first place.

If watching this classic has you dreaming of a new, modern kitchen you may want to look at a Fitted Kitchens Norwich company such as https://www.graysfittedfurniture.co.uk/kitchens/ who can have your kitchen looking slick and stylish in no time at all and you could rival any of the TV kitchen sets.

« Tips for a successful restaurant
Panto – A British Institution »