Google has decided to split Hangouts in two to finally become a business productivity tool with which to compete with Slack and HipChat. The search engine company had been warning since August that Hangouts would become a tool aimed at business, and reminded us again in January announcing the closure of its public API. 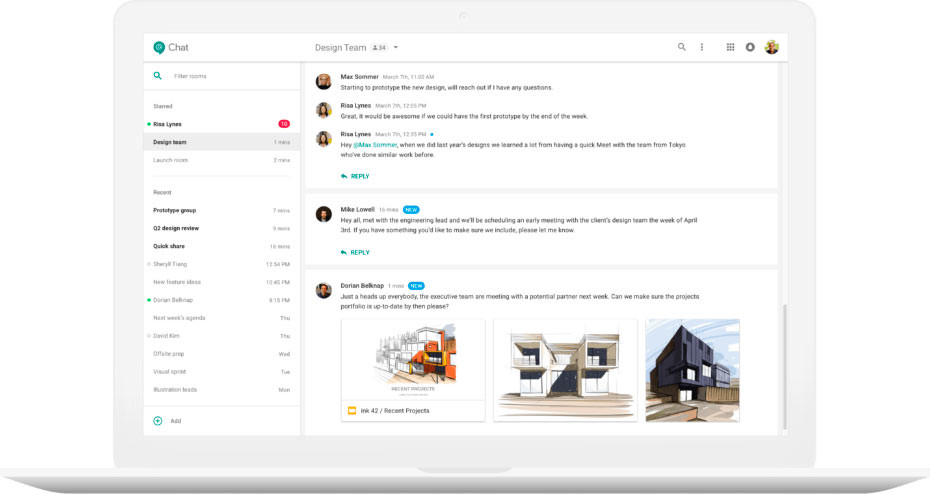 “More than half of the staff will work remotely by 2020, so companies need tools designed specifically to help employees succeed,” says Google’s release. “Our customers have told us that it should be easy to connect through video and that the chat should be more collaborative, so we are evolving Hangouts to focus on two experiences that will help unite teams and get the job done.”

Hangouts Chat and Meet by the professional field

On the one hand we have Hangouts Chat, which is an alternative to Slack and HipChat in which different rooms can be created to divide the work and conversations. We can think of it as a tool for companies to create their own IRC, with different channels for different sections or divisions, and a system of private messages so that conversations do not stop flowing.

It will have clients for Android, iOS and web browsers for PCs, and its great strength will be the integration with the rest of G Suite services . This means that you can share documents and Google Drive spreadsheets, as well as photos or videos that will be displayed directly in the chat rooms where they are shared. Obviously it will also be integrated with Hangouts Meet, as well as with Google Calendar.

In addition to its own applications, Google will also integrate third-party services. On the one hand it will allow the creation of scripts based on Google Apps and bots to perform different tasks, and on the other it will integrate third-party applications such as Asana, Box, Zendesk or ProsperWork from the launch, and it is expected that they will arrive more with the passage of time.

And in second place we have Hangouts Meet, which is a spin-off of the entire Hangouts videoconference infrastructure. Its main characteristic, according to Google, is that it will need very few resources to be able to be used from less capable computers, and it will support video and voice conferences of up to 30 participants.

This application will have versions for Android and iOS, and in its browser version will support the Web RTC standard, so Chrome and Firefox will not need to install any plugin to run it. To avoid some known problems of Hangouts at the time of initiating conferences, those who have been left outside may request entry to the conference to avoid having to wait for them to be invited.

Application to application, Google has ended up having a confusing ecosystem of messaging apps with many that overlap each other. To put a little order, has ended announcing the closure of Spaces and redirecting Hangouts to the professional field to leave the users to Allo and Duo.

At first many of us felt a little worried about the fate of Hangouts, but finally it seems that Google has managed to make it a leading application that has enough features to compete with Slack and HipChat as it could not do with WhatsApp. It remains to be seen if everything stays in good intentions or if finally this time they get Hangouts have that impact.

Meet Hangouts is now available as of today, and will gradually reach all G Suite customers. In addition, customers of the professional suite of Google tools can already request to try Hangouts Chat through the early adopters program of the search engine company, so it is expected to finally arrive in the coming weeks or months.