The Brits are renowned for their stiff upper lip and serious demeanour, but lurking underneath that is a wicked sense of humour. We have an uncanny knack for sending ourselves up, irreverence for authority and a devilish sense of irony that makes our comedies some of the finest in the world. Whether it’s the slapstick of Monty Python or Mr Bean, or the sharp wit of Blackadder – we love our comedy shows. Here are just a handful of some of the best:

Little Britain started life as a radio series, but its popularity drove it to the small screen. First airing in 2003, it wasn’t long before the British public were repeating catchphrases and taking the bizarre characters to their hearts. The brains behind the show are David Walliams and Matt Lucas, who explore the strange and silly characters found across Britain. Presented in a documentary style with a voiceover narration, making it seem like these ridiculous characters are a real cross-section of modern British inhabitants. It’s not especially flattering but we can all relate to at least one of the characters! 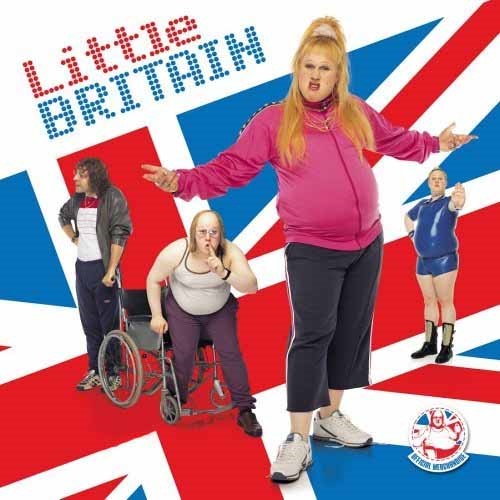 Absolutely Fabulous was a wonderfully bright and hilarious tale of the ups and downs of two posh London ladies who desperately try to stay young and hip. Joanna Lumley and Jennifer Saunders were amazing together, with the characters of Patsy and Eddy becoming much adored by the British public. Its success was evident by the fact that it ran from 1992 to 2012 – a length almost unheard of for most shows. They even made a feature film about the ditsy duo.

Only Fools and Horses is a British institution. It is one of the most iconic and quintessentially British shows on TV and you only need mention it to have people singing the theme tune or doing impressions of Delboy. Based around two Cockney brothers during the 80s and 90s, their ups and downs and dodgy business deals. Always trying to get rich quick, it does eventually happen – but the story doesn’t end there. The show remains a phenomenon and has had two spin-offs, equally as successful. Never miss a belly laugh again with TV Aerials Swansea from https://www.onevisionltd.co.uk/tv-aerial-installation-swansea

The Office starts with images of a dull, grey office building in Slough – the kind of image we’ve all seen a thousand times on our way to work. However, what this comedy show achieved was truly revolutionary. Thus, was born the ‘mockumentary’ in 2001. Initially, it was hard to tell if David Brent was for real or a joke but as the penny dropped, the show was massively successful and sky-rocketed Ricky Gervais to global fame. The show made it to the U.S with the same concepts and crazy boss, played by Steve Carrell.

Blackadder is unique in that history comedies are difficult to pull off. They did pull it off with this series though, following Blackadder through various different periods in history from the reign of Elizabeth I to the trenches of World War 1. Blackadder is a true anti-hero who embarks on many an ill-fated adventure with his ridiculous and much-abused sidekick Baldrick. The cast including famous and much-loved British comedy actors who all provided superb performances. It ran for four series between 1983 and 1989. Back in 2012, it was voted by the British public as the best of British television, even beating Doctor Who! A tour of Hogwarts