The people of Rapa Nui, also known as Easter Island, were once renowned for their tribal ear-stretching practices. When the Dutch landed on the island back in 1722, they reported that the Rapa Nui’s clan chiefs and holy men had balls the size of their fists lodged in their severely stretched lobes. 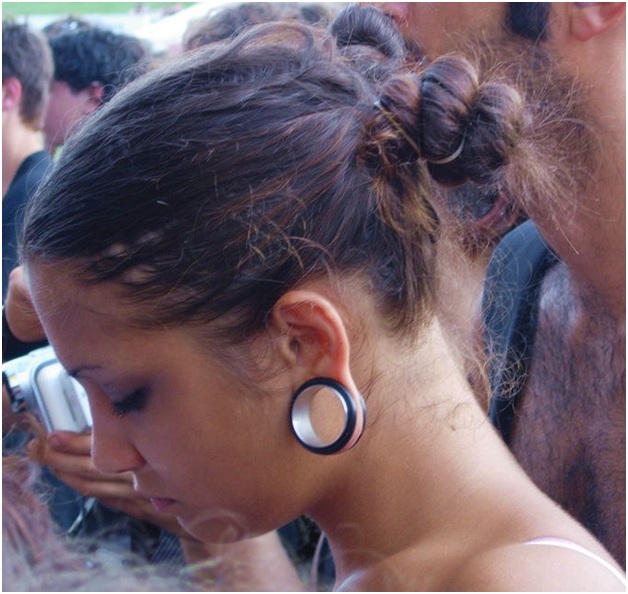 Supposedly, when the Rapa Nui removed the balls and discs with which they stretched their earlobes, the lobes were left dangling right down to their shoulders. As a result, for the sake of convenience, the men would have to tuck them up on the tops of their ears to prevent them getting in the way.

Not that the men were the only ones involved in this practice, as women got in on the act too, wearing sharks’ vertebrae pendants in their ears.

With the influence of Christianity, these tribal practices gradually died out on Rapa Nui, and its people diminished and eventually left altogether, leaving behind them the famous Moai statues.

However, earlobe stretching and the practice of inserting discs and other objects into the earlobe have gained in popularity in the Western world. DIY kits are now available to buy, and there are all kinds of flesh plugs, tapers, gauges and flesh tunnels available for you to put in. Earlobe stretching is gaining the same appeal as tattooing, piercing and other similar practices known as ‘sub-cultural’. It is particularly in vogue among the heavy metal and punk communities, though more mainstream artists such as Adam Lambert are also devotees of the art.

However, as with any form of body modification, earlobe stretching does have its adverse effects. Beyond a certain point, the hole in the ear can never return to normal, and you may suffer from what’s known as a ‘blow-out’, when the ear flesh extrudes. Thankfully, problems with your earlobe can be fixed via surgery.

If you require earlobe repair, then why not get in touch with a clinic such as http://londoncosmeticskinclinic.co.uk/earlobe-repair/ to see what treatment they can offer you?

Remember that while body modification is a fascinating form of self-expression, it can still have long-lasting consequences, so you should be very careful. Also bear in mind that if you experience any pain you should stop, as the practice should be pain-free. What is body art? Contouring, technical makeup of the famous