Nissan warned that in the Hall of New York would bring something interesting, and has been, because on the first day and will present the new Nissan GT-R. The sport gets a few tweaks Japanese affecting both its exterior and the interior.

Outside Godzilla has a new even scarier aspect, but it is not just to scare their opponents, but the result of the enormous hours of aerodynamic study those before it. Inside they include a new dashboard, a center console redesigned and finishes that are more luxurious. 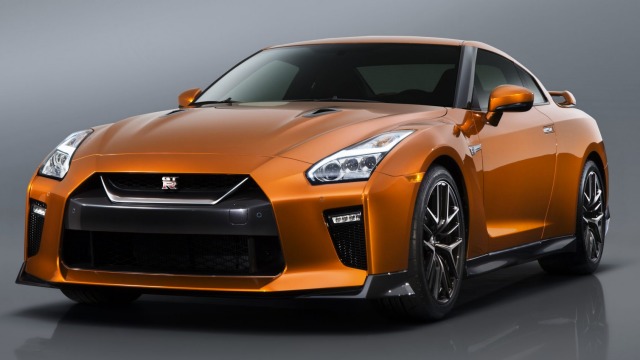 If we started looking, we realize that the front rather changes over its predecessor. Now the new grille “V-Motion” receives a matte chrome finish besides being a little bigger for better cooling its engine. The hood is also new, it has been strengthened to improve stability at high speeds and rolling at the bottom ends of the bumper lip vertically on the sides in the same court that the headlights.

Both the sides and the rear also been studied in wind tunnel to improve air flow and contribute to greater stability . The side skirts are new and although we continue to see the same design language with the four rear lights and four exhaust outlets, there are many changes that make it more effective against the air like a diffuser that grows in size.

The award – winning 3.8 – liter V6 engine, twin -turbocharged 24 vascular remains, but now delivers570 horsepower at 6,800 laps. This subtle improvement has been achieved by controlling the ignition timing of each cylinder and with a little more blowing force of the turbos. Nissan announces an acceleration from the middle of the tachometer (from 3,200 rpm) stronger.

The gearbox six – speed dual clutch has refined its operation and gear changes promise to be softer and less noisy. The new titanium exhaust and Active Sound Enhancement (ASE) have also been retouched for the Nissan GT-R sound better than ever and emphasize the driving experience to almost orgasmic.

Although the handling of the Nissan GT-R was already good, the greater structural rigidity of the body and the new tuning of the suspension make him a car capable of devouring linked curves without breaking a sweat and maintain a speed exceeding drawn. The tires are standard forged aluminum 20 – inch wheels Y with black finish.

A luxury interior for Godzilla

We jumped inside and we find the link between the premium quality and performance car . The dashboard is new and is covered with hand – stitched leather, also adopting a new horizontal layout. This new interior is more focused towards the driver and leans towards him to give a greater sense of integration with the vehicle.

The center console with color touch screen 8 – inch is also new, cleaner. It has reduced the number of buttons from 27 in the previous generation to 11 in this and added a new driver made ​​of carbon fiber.

The steering wheel is a new bill and includes some improved cam behind him. Both the feel and performance of its functions have been revised for a more enjoyable experience as told Mamoru Aoki (Executive Director of Nissan Design):

As an icon of the driving experience of Nissan, the GT-R continues to evolve. With the signing of the front grille V-Motion, the GT-R adopts new Nissan design language. The exceptional aerodynamic performance and improved interior give the GT-R a more mature character that will continue in the future.

Hiroshi Tamura (Product Manager) is also full of praise towards his new creation:

The new GT-R offers an exciting driving experience at all times and on any road for anyone to sit behind the wheel. We have taken a step beyond the boundaries of performance of the GT-R to be even more powerful than before. At the same time, it is more refined for a more luxurious driving experience.

We are proud to feel that our GT has outstanding performance, is more civilized and continue to increase their triumphs in competition.

Finally, there will be new colors to decorate the GT-R both inside and out. Outside a new painting “Blaze Metallic” multilayer get an exquisite finish while inside there will be four different combinations of finishes within the Premium Edition.